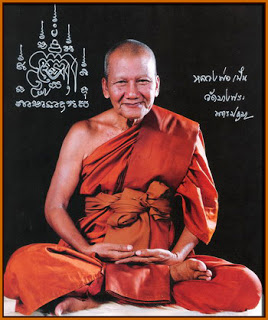 Material made: Made of Copper with Black Oxide Plating

When an amulet featuring a Tiger’s Image is discussed upom, Luang Por Pern will be what most individuals will immediately thought about due to Luang Por Pern’s great fame and recognition within the industry!

Decades ago, during Luang Por Pern’s earlier days as a monk, he frequented and wanders into remote jungles in seek of solitary meditation, usually along Thailand-Myanmar’s border. And it was there when he offered incantations to protect border villagers from wild animals attacks, especially tigers roaming the lush jungles. His fame spread far and wide when the incantations helped protect and saved many of the villagers lives.

This featured medallion is the 1st Issue Medallion blessed by Luang Por Pern in Year 2519 B.E.

Condition is easily the most beautiful piece we have ever seen! It is almost as if the medallion is newly minted from than being a piece made nearly half a century ago! Most, if not all, that we have seen are damaged one way or another. It is especially prevalent on the facial features of the image. What is featured here is near flawless with the facial features almost perfectly preserved!

Luang Por Pern passed away in 2002, and despite his passing, his temple: Wat Bang Phra continues to attract tens of thousands of devotees to pay respect to him throughout the year! This properly signifies and amount of merits Luang Por Pern has cultivated during his lifetime!