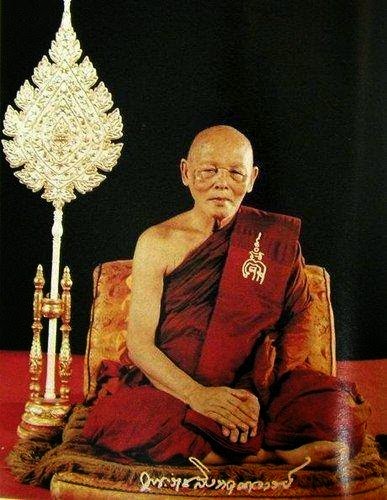 Material made: Made of SOLID GOLD

CHAMPION AND TIP TOP CONDITION CONDITION!
EXTREMELY RARE SOLID GOLD VARIANT!
ONLY 100 PIECES WERE MADE IN THE WORLD!

Luang Por Pae is one of the the most respected monks in the province of Singhburi whom was also appointed to be a deputy supreme patriarch presiding over the province of Singhburi. Highly cultivated and widely respected by people all over the country and abroad. A firm believer of education, he spent many years of his life building schools, even within temple grounds, for underprivileged children in hopes that education will be a stepping stone for their future!

Though very well known for his Phra Somdej amulets, amulets or worshiping statues depicting the image of Phra Sangkachai blessed by Luang Por Pae are widely renowned as well!

Phra Sangkachai is known as Kātyāyana or Mahākātyāyana and was one of the TEN principal disciples of Lord Buddha himself.
According to history and ancient texts, Buddha praised Phra Sangkachai for his excellence in explaining sophisticated concepts of the Dharma in an easily and correctly understandable manner. Phra Sangkachai is also known for composing the Madhupindika Sutta.

This beautiful image of Phra Sangkachai was the final batch of amulets blessed by Luang Por Pae.
This featured piece is made of SOLID GOLD! Extremely rare and there were only 100 pieces made in the world!

Every piece is hallmarked with a serial number and this beautiful piece is no exception!

Despite being relatively new, with an age of under 30 years ago, it is mind boggling rare to come across a piece in SOLID GOLD!

The condition of the amulet is FLAWLESS! ABSOLUTELY FLAWLESS!

Amulet as such, are casted using primitive casting methods that involved the pouring of molten alloy into casting mould which will then form the shape of the item. Due to the primitive nature of such casting methods, there are a lot of inconsistencies.

To find one piece as this item featured here, in such an immaculate condition, is of incomprehensible difficulty. Noticed the perfect texture found on the surface? It is a typical example of sheer luck with the right amount of molten gold being filled in the cast thus preventing bubbles from forming on the surface of the amulet!

An extremely worthwhile piece for any discerning collector looking for an extremely rare SOLID GOLD piece for their collection!

INCLUSIVE OF A CUSTOM MADE SOLID GOLD DIAMONDS ENCRUSTED FRAMING!